Fidelity is the Enemy 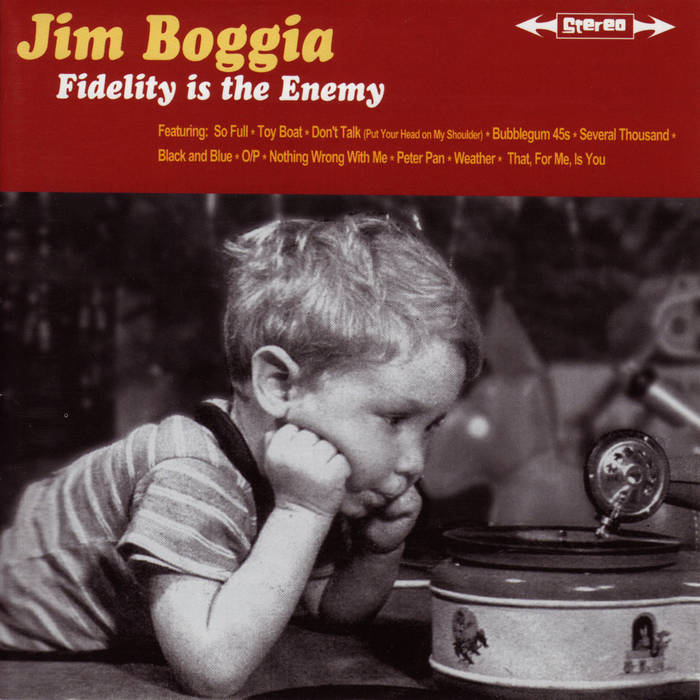 Wanna know what else?

Brian Bricklin mastered the record at Push Music Services. Butch Ross and I designed the cover (Joey Mutis was a definite influence). Lauren Lyons took the photo. Emily Chatton did the biomorphic faux-daisy graphic. All songs © Various dates by Jim Boggia/scrApple Music Publishing except 'Bubblegum 45s' ©1999 Jim Boggia & Jonathan Coulton and 'Don't Talk (Put Your Head on My Shoulder)' ©1966 Brian Wilson & Tony Asher/Irvin Music. Jill Sobule appears courtesy of Beyond Records. Kevin Hanson appears courtesy of Shanachie Records. Sue and Steph appear without their knowledge. Everyone else appears on their own behalf. By the way, I'd like to work with Jon Brion.

Wanna know who I'm going to thank?
First, the musicians and technicians who participated in making this album. Thanks for sharing your talent and helping me create my love letter to Pop music. Then, to my family for enduring my wanderings and still loving me.

Wanna know who I forgot?
Maybe You. If so, I'm sorry.

Anyway, that's how I remember it.

The original emails sent out to promote the album:

JIM BOGGIA - FIDELITY IS THE ENEMY

Hey Kids (shake it loose together),

And you said it would be hard.

After an I N C R E D I B L Y long and taxing process, I am tired to
announce the completion of my first full-length LP 'Fidelity is the
Enemy.'

Not so fast (you didn't think anything in this process would be fast,
did you?).

The recordings and artwork are currently at the manufacturer and it was
my intention to make them available for the May 6th show. But somewhere,
someone somehow thought 6 plus 6 equals 12 and now I will NOT have them
until next week.

"That kinda sucks" - I hear you murmur.

Well, yes and no. While it is true that you will not be able to give me
the disposable income that I've been trying to take from you for over 13
months now, you CAN hear the record (well, most of it).

Thanks to our new friend, Technology, you can zip on over to:

and listen to 10 out of the 11 songs on the record. You can even read
the lyrics.

Don't be that way.

Besides, the record sounds better, has cool little bits between songs
and features my 20 second spot on rendition of Brian Wilson's unused
background vocals from 'Don't Talk (Put Your Head on My Shoulder)' (a $40
value, yours free with any Lancome purchase).

As an added bonus, there's a picture of a really cute kid listening to
records on the front cover.

As an even greater added bonus, the picture of me is kept off the front
cover and small so as not to startle you too badly or distract you from
the listening experience.

I'd really appreciate it if you'd all take a listen (in HiFi PLAY if you
can) and let me know what you think.

I'll send an even wittier email next week with details on how to
actually own your own copy (I hope you'll want one).

Thanks to everybody for being so supportive and patient and thanks also
to those of you who've already found the mp3 site and written me with your kind
remarks.

Not since the release of the Milli Vanilli Anthology box set have so
many yearned so long in anguished anticipation for an album to be made
available for purchase.

There's dissipation for your anticipation.

After exhaustive negotiations (excerpt -
Me: Um, do you want to sell these?
Pat: Yeah, alright.) I have reached agreement with my dear friends at
Main Street Music in Manayunk to distribute my mildly anticipated debut
album,'Fidelity is the Enemy.'

Main Street Music in Manayunk will be the EXCLUSIVE retail source for
'Fidelity is the Enemy' through at least 6.15.01, the date of my RECORD
RELEASE PARTY at the North Star Bar (8:30p - details to follow).

Reasons to buy 'Fidelity is the Enemy'
* Kid Rock does not appear on any song.
* Jill Sobule does.
* It's only 46 minutes long, so you can get quickly back to listening to
music you like more, like Kid Rock.
* There are bound to be plenty of lawsuits, so get it now while it's
still available.
* I could use the bread.

So, that's it. Stop crying to me about when can you buy the record. I
hope you will like it.

'Fidelity is the Enemy' - Collect them all, trade with your friends.

Program 2
O/P
Nothing Wrong with Me
Peter Pan
Weather
That, For Me, Is You

Still to come:
Kevin Hanson plays an insane solo.
I am the humbug. GOO GOO GOO JOOB. ("No, You're Not!" said little Ruby Zima).


This Stereophonic recording will work on Mono Catridges and Stereo Cartridges wired in Mono. Many newer models come equipped with appropriate cartridges installed. If you are unsure of your model, consult your dealer.