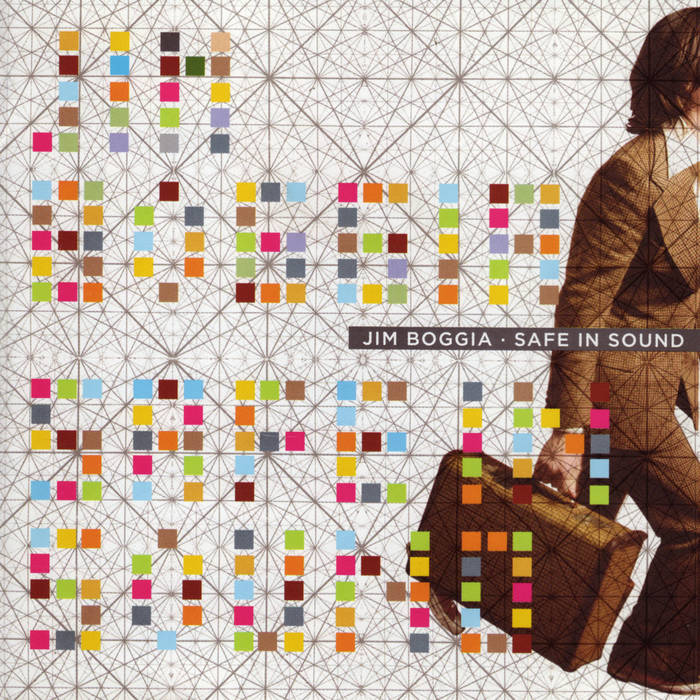 Most Songs:
RECORDED by JOE ZOOK
with ADDITIONAL ENGINEERING by ELAN TRUJILLO AND JULIAN CORYELL
RECORDED at SAGE AND SOUND, EL-DORADO and TRACK RECORD STUDIOS
TRACKING ASSISTED by ERRIN FAMILIA and BRIAN COMETA
ADDITIONAL RECORDING done at JIM'S HOUSE and JULIAN'S APARTMENT and CAMP SHANE ('Show My Face Around')

'WHERE'S THE PARTY?'
RECORDED by SCOTT BRICKLIN, MATT MUIR and PETE DONNELLY at PALAIS ROYALE (mixed by ZOOK, see above)

Did I mumble?
You can find the answer to the question "What the hell is he singing?" by visiting www.jimboggia.com.

Who's Representin'?:
Representation (not Management, 'cause I'm unmanageable): Jack Leitenberg for dpe.
Legal (I'd rather you NOT sue me, but if you must): Nick Sciorra - Sciorra, Leaness, Averill and Rubenstein, LLP.

The original email sent out to promote the album:

'SAFE IN SOUND' RELEASE AND PARTIES


There's a lot of stuff to tell you, but it's all very exciting, so read it all, okay? Thanks!


'SAFE IN SOUND' IN STORES 5.3.05:
I'm incredibly pleased about the imminent release of my new album, 'Safe in Sound'. It will be released nationwide on Tuesday, 5.3.05 on Bluhammock Records.

I was amazed at my good fortune in making this record. Armed with a duo of producers, Julian Coryell and Joe Zook, who really understood me as a musician and writer and who worked their asses off to capture all the crazy sounds I hear in my head, I think we made an album that you're going to really enjoy listening to and listening to again.

Core musicians on the album include Pete Thomas from Elvis Costello and the Attractions/Imposters, Justin Meldal -Johnson from Beck's band and Butch from the eels.

To keep it all feeling like home there's also big contributions from a bunch of my current and former Philly faves, including Mike Frank, Scott Bricklin, Pete Donnelly, Roger Cox and Shane Smith.

Extra special, "really, this is happening on my record?" moments include a song co-written with Aimee Mann, plus an appearance by Aimee on another tune - - my friend who I've learned so much from, Jill Sobule, singing some joyous background vocals - - working with a childhood hero, Emitt Rhodes, who co-wrote and sang backgrounds on a tune - - and having Wayne Kramer from the legendary MC5 come in and play some truly raucous guitar and then stick around and hang for a couple of hours and be the sweetest guy you could ever meet. If this record never came out, the experience of making it is still something I would remember for the rest of my life.

But it IS coming out, and despite all the names involved, I'm most pleased that it still feels like my record, my music, and pretty genuine and heartfelt at that.

I really hope you'll all dig it. If you can't wait to go to the stores on May 3rd, you can pre-order a copy at www.awarestore.com.

I look forward to hearing what you all think of it.

This is going to be a big blow-out with a great band assembled just for the occasion. It's ALL-AGES, so don't let the fact that you're unable to legally drink stop you from coming out and having a good time (or at least not any more than not being able to legally drink prevents you from having a good time in any other situation). If you ARE old enough to drink, come out and snicker to yourself about how you're having a better time than all those underage kids who can't legally drink. It's okay, don't feel guilty - they're snickering at us because we're old.

Obviously, this is a really big deal for me and I hope that you all will want to come out and share it. It's been a long road to this point and you've been a big part of making it happen, so come out and pat your self on the back. I also encourage you to pat each other on the back. Hell, I may even go round and pat you all on the back personally - it's going to be that kind of night.

You can order tickets in advance by going to www.worldcafelive.com.


'SAFE IN SOUND' RECORD RELEASE PARTY - NEW YORK - 5.10.05:
Well, if you're gonna go to all that trouble to make a record, AND assemble a band and have a Record Release Party, why do it again the next week in New York City? Because my manager Jack said it would be a great idea!!! Also, I want to celebrate with all the great people in NYC who've made it a second home for me musically. In fact, that's why I'm playing there second!

So, I'm gonna have ANOTHER Record Release Party in New York City. This one takes place at Joe's Pub on Tuesday, 5.10.05 at 9:30p. It's also ALL-AGES, so all the same pros and cons apply for the good folks of Gotham, with the additional bonus that you will have to go outside to smoke. What could be more rock and roll?

Despite my flippant attitude (sorry - it's my DNA), playing in NYC has been a very big deal to me and I thank everybody who has been supporting me. I hope to see you all there.

You can pre-order tickets for this auspicious event at www.joespub.com.

'SAFE IN SOUND' in stores nationwide on 5.3.05.
Pre-order: www.awarestore.com

Believe it or not, there's actually a bunch more going on, but I'll let you digest this first and talk to you again later in the week.

SAFE IN SOUND
Shine
Live the Proof
Show My Face Around
Underground
Where's the Party?
Once
Made Me So Happy
Talk About the Weather
Let Me Believe (Evan's Lament)
Final Word
Slowly
Supergirl